Passing Through Nature To Eternity 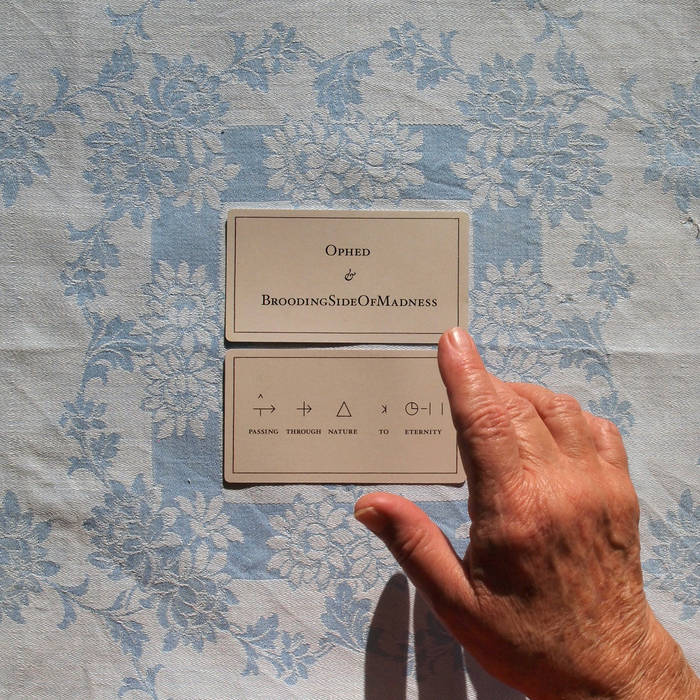 Etched Traumas presents the collaborative release of BroodingSideOfMadness and Ophed – a release with two virtual sides by both artists. For BroodingSideOfMadness, the inspirational basis for constructing his work was the iconic euthanasia scene of the Soylent Green (1973) film with Edward G. Robinson as Sol Roth and, particularly, the last moments in a man's life. There's a certain concept that BroodingSideOfMadness admitted to himself gradually when finalizing each track. It has to do with a family member's dementia issue and how a "blissful" sound could emulate the inevitable moment of 'pass away'. His goal was to compose a joyful sound, not a depressed one.
After composing his tracks, BroodingSideOfMadness sent them to Ophed for further manipulation. So, all tracks were processed by Ophed, who was given 100% freedom to manipulate them as much as he'd like. Ophed was not aware of the underlying concept of the tracks but, during their exchange of ideas for this release, it became clear that both artists worked on the same topics in their minds, such as the pain of loss, the frustration, the sadness and the illness. However, they both sought an optimistic perspective out of them.

What's the connection for an elder’s slowly fading memory brain and an unfair illness of an infant? There are many symbols that help us out to unlock the outlook of this work. On the one side, memory fragments as a miniature of life that comes and goes leaving the patient in a constant procrastination. Bells and running water. On the other side, there is birth, parenting, and its magnificent impact. A gateway to the world and to the future: this new life is memory-free. A voice says: "Plus haut papa!, Je veux toucher le ciel" [Higher dad, I want to touch the sky.
But cancer's conquering is imminent. A toy horse galloping but she is not as 'strong as a horse’. Then the laughter of children becomes the cries of suffering. The whining of toy-horses becomes a howling. The identity becomes distorted when there are no lived moments anymore. Dementia is here. Pain, memory loss, and waves of a sound move like a pendulum.
In the end, the tension relaxes. Back to dust. A new arrival, a passing to eternity. A soundscape lightened by sun rays, peaceful and paradisiacal. A blissful shutdown.


Ophed is Sylvain Desfossés and he comes from Quebec, Canada and he is a composer influenced by various genres of music, ranging between 20th-century classical composers to contemporary popular dance styles, or from South American rhythmic to the simple complexity of polyphonic African music and the tribal dance of Indonesia. He seeks a perpetual fluid/motion element as he always tries to build a consistent shape out of a fluid, a never stopping energy.
He composes for about 20 years and has various works in visual art and experimentation. Conceptual art is just a side of his personality, though. Basically a minimalist, he uses random set patterns, reverse audio, spoken samples, detune, distortion, and explores poly-rhythmic and polyphonic soundscapes. Ophed considers the reversed techniques as his signature in his work. For him, music is a language, therefore, he gives priority to the message he wants to communicate.

BroodingSideOfMadness is interested in phonemes, graph theory, realism and any dystopian ambiance. He prefers using acoustic material than synthetic and he always seeks for the generative element in his tracks. His diverse work comprises of two large choices the one with lyricism and melody and the noisy one, sometimes he merges those two. He tackles with sound and moving image as a composer and a video artist. He is the founder of Etched Traumas netlabel.
credits